Winner of the Children's Music Web Award for "Best Album for Children ages 7-12"! 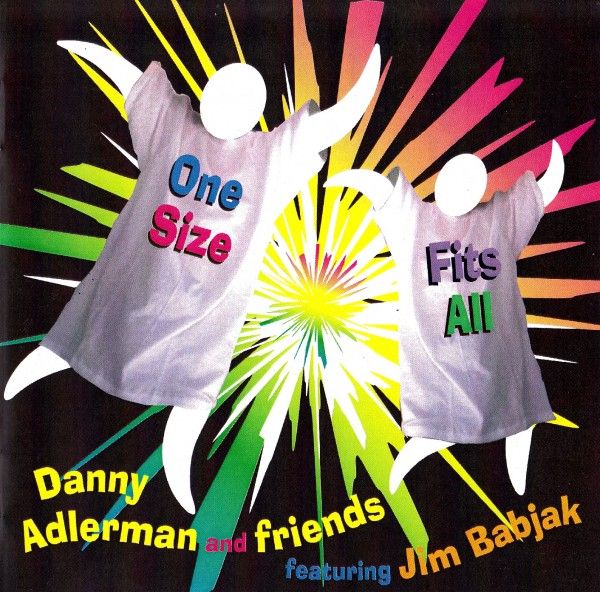 One Size Fits All

Our first album! Featuring songs not only from our books Africa Calling, It's Raining, It's Pouring, Humpty Dumpty, and Hey, Diddle Diddle, but other original children's music, including contributions from the mighty Jim Babjak of The Smithereens (who also provided most of the guitar work, by the way)!

This is not your grandfather's children's music!

With guitar work by Jim Babjak of The Smithereens , and featuring The Grip Weeds Kurt Reil on drums with all three of us co-producing, ONE SIZE FITS ALL is a fresh new take on children's music—it is NOT the type you have heard before; it is respectful of a child's intelligence, great rock and roll, and a terrific good time! Parents will love it as much as kids.

CD comes with an eight page booklet with lyrics.

Or buy at our store.

"In a word, WOW! Sometimes I get a CD that is not only a pleasure to play on the show, but is also one I listen to in my free time. What an awsome listening experience. Some new material, some older songs that you might recognize. Yet for me, it's the "oldies" that are most amazing. Danny puts a new twist on music we all know. And it's one heck of a twist.

My favorites are "Elliott" and Humpty Dumpty. Yes, Humpty Dumpty. I promise you've never heard it like this. Some of the song is "new" material and not only does it sound like it's always been sung this way, it seems like it's part of the orginal ryhme. The additions to "It's Raining, it's Pouring" are fantastic. All in all every song is a star. It is also a best in category winner from Children's Music Web. I would HIGHLY recommend this CD to anyone".    —Chris Trochez - The Uncle Chris Radio Show - WTUL Tulane University

"Children young and old will jam to these ten summery feel-good anthems, including original compositions like the beachy Surfin' the Net and The Library Song and boisterous versions of nursery rhymes, such as Rub a Dub Dub and Humpty Dumpty". —Parenting Magazine, June/July, 2001

"Children's music is thriving, due in large part to the recent contributions of independant record labels. Sure, the big companies put out many albums, too, but these are often highly commercial projects, stronger on marketing potential than on musical excellence. So this month, I want to spotlight some new music from a few of the independant artists who won't get a media blitz but are deserving of attention. My first pick is One Size Fits All by Danny Adlerman (Kids At Our House Records, 2000). I have a low tolerance for children's artists who feel that the sweeter and more syrupy they come across, the better. From the first moments of One Size Fits All, I knew that isn't Adlerman's approach. The first cut, Africa Calling, grabs you right away with it's jungle animal sound effects and keeps your attention throughout with a musical arrangement reminiscent of Paul Simon's 'Graceland'. Five of the 10 songs on this album are musical adaptations of picture books written by Danny and/or his wife, Kim, (under the pen name of Kin Eagle). I have been a fan of Kin Eagle's books for a long time, and was excited to see some of them come to life musically. Danny and Kim favor starting with a traditional rhyme or song and expanding the story line. On One Size Fits All they have included fine musical arrangements of It's Raining, It's Pouring, Hey, Diddle Diddle and Humpty Dumpty. But I like Rub a Dub Dub best. It's a hilarious tale of the famous three from the tub who were sent out by their wives to snag some dinner. After quite a few mishaps, they return feeling rather silly and vowing not to tell their wives why. The listener, of course, hears the whole story. How Much Wood Could A Woodchuck Chuck? is another creative song built around a rhyme. The musical arrangement has a Grateful Dead feel, as Danny sings 12 different tongue (in cheek) twisters including, 'How much straw could a strawberry bury if a strawberry could bury straw?' and my favorite, 'How much chi could a cheetah tie if a cheetah could tai-chi? One Size Fits All is brimming with clever songs sure to be enjoyed by children and adults alike".    —The indies of kids' music by Fred Koch

"One Size Fits All by Daniel Adlerman and friends is one CD you will want to add to your child's list of music. From the very beginning of the CD, I was transformed by the great beats into a land far away. The beats are warm and fun and put you in the mindset of the ever popular Lion King and invite you and your kids to dance and hop around. The songs and lyrics are easy to follow along with and encourage learning, this can be heard in songs such as Surfing the Net and the known Library Song. One Size Fits All also reintroduces some old classics nursery rhymes like Rub A Dub Dub, It's Raining It's Pouring and Hey Diddle Diddle. The theme on this CD is a great way to incorporate your child's favorite bedtime story with music. Music is one of the many talents of Mr. Adlerman, he is also an accomplished and noted children's author. His talent and dedication are evident in the renowned Africa Calling. The layout and style of this book promotes reading to the youngest of children. The images and illustration in Africa Calling are a wonderful mix of imagery and nature. The colors are so bright and brilliant they will keep little one's fixated in Africa.".    —A Universal Fit by Vendetta Thornton

Vendetta Thornton is the entertainment editor for SimplyFamily.com, 2001

"Surfin' the Net has a nifty Beach Boys sound...youngsters will love twisting their tongues around How Much Wood....an ideal album for the baby of the family who won't be joining siblings in school for another year".     —MetroKids, September, 2001

Hi Danny!
We love your cd! We do listen to it a lot, and I plan on purchasing a few more in the near future for baby shower gifts.
My husband found the Playhouse Radio music site, and that's where we first heard your music. I followed the link they provide and decided to purchase the cd directly from your site. Feel free to add us to your mailing list.
My favorite song is Rub a Dub Dub. My 2 year old (Chase) likes Hey Diddle Diddle, and requests that I play it over and over and over....!!!!
Thanks for making great music!    —Cecillia McLean, Parent and fan